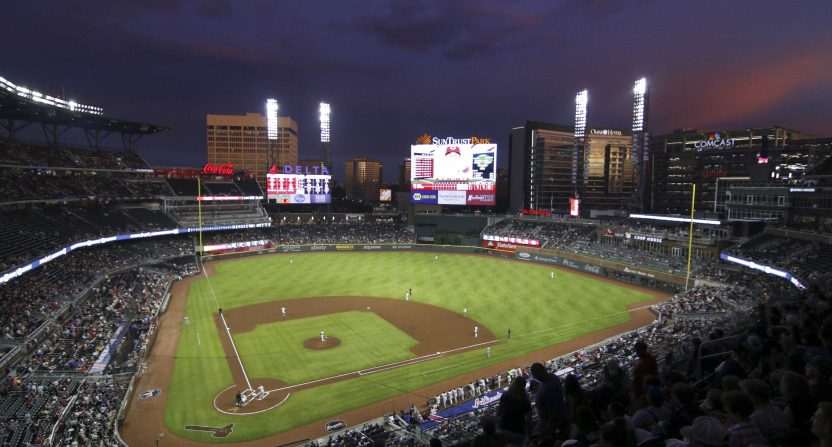 SunTrust Park is a baseball park located in the Atlanta metropolitan area. It is approximately 10 miles (16 km) northwest of downtown Atlanta in the unincorporated community of Cumberland, in Cobb County, Georgia. This ballpark is also the home to Atlanta Braves of Major League Baseball (MLB).

On November 11, 2013, the Braves announced that the franchise would leave Turner Field for a new park after the 2016 season. Since the move in April 2017, the Braves have played their home games at SunTrust Park. The 2017 Atlanta Braves season was the team’s first game in SunTrust Park. The Atlanta Braves defeated the New York Yankees 8-5 in an exhibition game on March 31, 2017, in their first game in the ballpark.

The Braves’ regular-season opener was held on April 14, 2017. A ceremonial first pitch was thrown by Aaron, with Cox serving as catcher. Previously, Aaron had also thrown the ceremonial first pitch for the Braves’ first and last games at Turner Field. The Braves defeated the San Diego Padres 5–2 in that match. The Braves center fielder Ender Inciarte recorded the first out, first hit, first run, and the first home run in the new ballpark.

SunTrust Park was constructed in a public-private partnership with a budget of $622 million. Out of the total project, Cobb-Marietta Coliseum & Exhibit Hall Authority issued up to $397 million in bonds for the project. An additional $14 million from transportation taxes were raised by the county and $10 million cash was given from businesses in the Cumberland Community Improvement District. The Braves contributed the remaining money for the park and The Battery Atlanta. Also, in March 2015, a security filing from Braves owners Liberty Media allotted $672 million for SunTrust Park and $452 million for The Battery Atlanta, which adds up to a total cost of above $1.1 billion. It is expected that the Braves will spend $181 million over 30 years to help pay off the county’s bonds on the project.

The location chosen for the park is next to the highway interchange between Interstate 75 and Interstate 285. The Braves claim the location was chosen as it is “near the geographic center of the Braves’ fan base.” During the park’s groundbreaking on September 16, 2014, the team announced that the naming rights were sold to Atlanta-based SunTrust Banks for a 25-year partnership. Braves officials announced that the park’s capacity would be 41,149, which is approximately 8,000 fewer than Turner Field (old stadium).

The baseball stadium occupies 15 acres (6.1 ha) of a 60-acre (24 ha) lot. The remainder of the space is devoted to parking, green space, and mixed-use development. There are approximately 30,000 parking spaces within 2 miles of the stadium. Although the new stadium will be over 10 miles (16 km) from the nearest train station, the Braves provides shuttle buses to shuttle fans to and from the stadium.

The Braves chose Populous to design the new ballpark. Populous has designed 19 of the 30 MLB stadiums currently in use including Marlins Park and Yankee Stadium. Earl Santee, Managing Director of Populous, claimed that his team “was very involved with the master planners of the development. The integration of this building (the ballpark) with those other buildings was really crucial to the success of the project.” The result was “a fully integrated experience that’s never been seen in baseball before.”

On November 20, 2013, the Braves announced plans to build a $400 million entertainment district that will surround the ballpark. The district will feature a street lined with retail, restaurants, and bars. The $400 million budget is entirely funded by the Braves and their development partners. It was on October 14, 2015, that the Atlanta Braves announced that the complex would be called The Battery Atlanta.

On April 28, 2015, the Braves announced a 50-50 partnership with Omni Hotels & Resorts, which will be a luxury hotel to be built overlooking SunTrust Park. The 264 rooms 4-star Omni hotel, and the Comcast office building, both of which overlook the stadium, opened during the Braves’ offseason in 2018, adding energy and activity beyond the outfield. It also features a two-story restaurant, rooftop hospitality suites, and an elevated pool deck with views into the ballpark. James Beard Foundation Award-winning chef and author Hugh Acheson have opened his eighth restaurant – Archie’s – within the luxury hotel as well.

On August 27, 2015, the Atlanta Braves held their first brick laying ceremony out of 775,000 bricks that made up the main exterior at SunTrust Park. On hand for the ceremony were distinguished guests from the Braves, Cobb County government, and ballpark sponsors. The first brick was laid by Eutis Morris, 83. He was also the same person who laid the first concrete block at Fulton County Stadium and placed the first and last bricks at Olympic Stadium, which later became Turner Field. Others include former Atlanta Braves player Hank Aaron and the team’s current first baseman Freddie Freeman. The team also sealed two-time capsules in the ground. The time capsules included a video of the SunTrust Park groundbreaking; parts of the Big Chicken; a 1948 World Series program; dirt from both older stadiums; a baseball signed by the 1995 championship team; and recordings from team broadcasters. These time capsules will only be opened when the stadium is demolished in the far future.

On February 24, 2017, the Braves received the certificate of occupancy for the entire ballpark. With seats, video boards and most other elements already installed, the turf was one of the last missing pieces of the new ballpark. Workers began the installation of 109,000 square feet of turf on March 4, 2017. It was a simple yet, tedious task that took two to three days to complete.

In 2018, renovation plans were unveiled. This renovation includes replacement of the top six rows of seats in sections 122 and 130 with sixteen semicircular tables, each with four swivel chairs. The change was made because the 80 four-person tables in the stadium’s original design, all on the terrace level, sold out quickly in 2017. The Delta Sky360 Club is open to fans in about 1,800 lower-level premium seats that were expanded by about 2,000 square feet.

Ticket Policies:
Find out more about our ticket guarantee and other ticket policies.